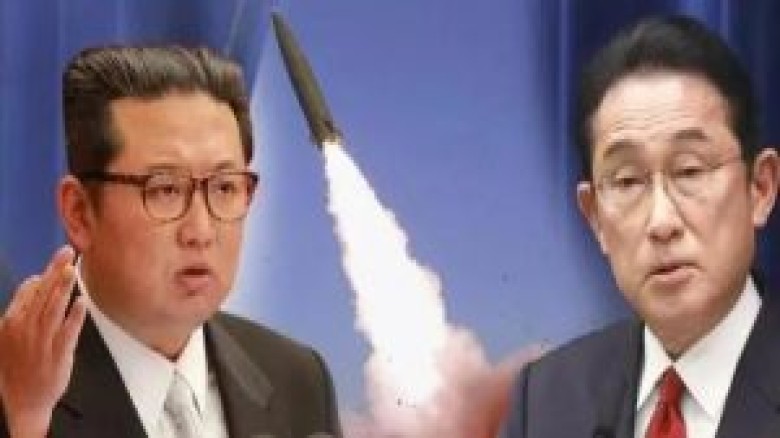 North Korea last fired a missile over Japan in 2017, at the height of a “fire and fury” period in which Pyongyang’s leader Kim Jong Un traded insults with then-US President Donald Trump.

The South Korean military said it detected the launch of an IRBM that flew around 4,500 km (2800 miles) at an altitude of about 970 km and speeds of about Mach 17.

“Specific details are being closely examined by South Korean and US intelligence,” the Joint Chiefs of Staff of the South added in a statement.

Yoon’s office said in a statement that he “ordered a stern response and to take corresponding measures in cooperation with the United States and the international community.”

“It appears that North Korea has launched a missile.” “Please evacuate to buildings or the underground,” the government said in a 7:29 a.m. alert (2229 GMT Monday).

The alert was issued for two northern regions of the country, according to NHK.

“It is believed that a ballistic missile flew over our country and landed in the Pacific Ocean.” This is a violent act in response to the recent repeated launches of ballistic missiles. “This is completely unacceptable,” Prime Minister Fumio Kishida told reporters.

If that was the case, the flight distance, estimated by Tokyo at 4,600 km, was thought to be a new record for that particular missile.

The last two times North Korea fired Hwasong-12 missiles over Japan, in September and August 2017, they travelled 3,700 kilometres and 2,700 kilometres, respectively, according to Chad O’Carroll of the Seoul-based specialist site NK News.

“This is the Hwasong-12’s eighth test, and the third time it has overflown Japan,” Middlebury Institute of International Studies’ Jeffrey Lewis tweeted.

With talks stalled, nuclear-armed North Korea has stepped up its military modernization efforts this year, testing a slew of prohibited weapons, including an intercontinental ballistic missile (ICBM), for the first time since 2017.

South Korea, Japan, and the United States held their first anti-submarine drills in five years on Friday, just days after Washington and Seoul’s navies conducted large-scale exercises in waters off the peninsula involving a nuclear-powered US aircraft carrier.

North Korea is enraged by such drills, which it sees as practice for an invasion.

Harris visited the heavily fortified Demilitarized Zone that separates the peninsula as part of a trip to highlight her country’s “ironclad” commitment to South Korea’s defence against the North.

Washington has 28,500 troops stationed in South Korea to help protect it from the North.

“If Pyongyang has launched a missile over Japan, it would be a significant escalation from its recent provocations,” said Leif-Eric Easley, a professor at Ewha University in Seoul.

“Pyongyang is still engaged in a cycle of provocation and testing,” he added.

“The Kim regime is developing weapons like tactical nuclear warheads and submarine-launched ballistic missiles as part of a long-term strategy to outrun South Korea in an arms race and drive a wedge between US allies.”

South Korean and US officials have also warned for months that Kim was planning another nuclear test.

According to the officials, this could happen soon after China’s upcoming party congress on October 16.

North Korea, which is subject to multiple UN sanctions for its nuclear program, usually aims to maximize the geopolitical impact of its tests through careful timing.

Since 2006, the isolated country has conducted six nuclear tests, the most recent in 2017.