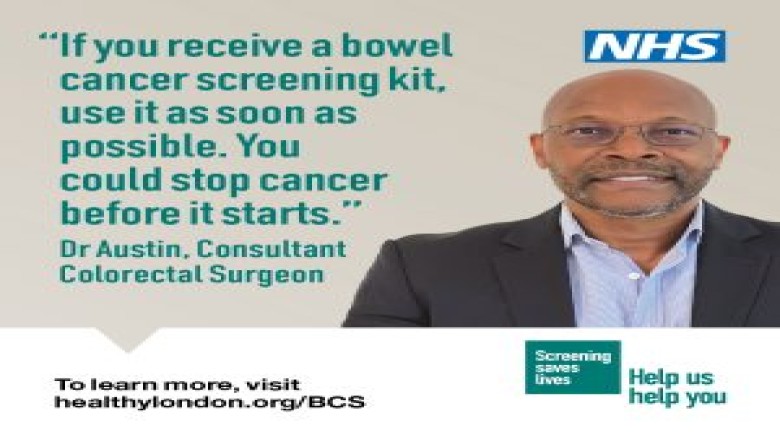 Leading Black celebrities – Sean Fletcher Good Morning Britain presenter, Kriss Akabusi MBE, Olympic athlete as well as healthcare professionals are rallying behind a life-saving NHS campaign. The new campaign encourages people in London who have been sent a free NHS bowel cancer screening home test, to use it – to check if they could have bowel cancer.

In the UK, 43,000 people are diagnosed with bowel cancer every year. Yet it is one of the most preventable cancers.

Bowel cancer screening can help prevent bowel cancer by finding it at an early stage when it’s easier to treat, and research shows that those who do their test are 25% less likely to die from the disease.

Dr Austin Obichere, Director of UCLH’s Bowel Cancer Screening Programme, said: “It’s important to normalise conversations about bowel movements and stool within Black communities in order for people to stop feeling embarrassed and complete their bowel cancer screening test when they receive it.”

“Screening can help prevent bowel cancer or find it at an early stage when it’s easier to treat. That’s why the NHS sends out free bowel cancer screening kits to use privately at home. They are for people with no symptoms and most people do not require any further investigations. If you are sent a kit, please use it.”

Good Morning Britain Presenter, Sean Fletcher, is supporting the campaign and said: “My mother passed away from bowel cancer – and the impact this had on us was devastating. I am calling on all those who have received a bowel cancer screening kit to do it straightaway. It only takes a few minutes – and could save your life.”

Olympic athlete, Kriss Akabusi MBE says “If you are aged 56-74 I urge you to take the simple bowel cancer screening test that comes through the post. As a fit, healthy and strong-willed man in my 60s I thought I was invincible, however, I had a cancer scare and it was a wakeup call. Do it for yourself and your loved ones.”

Taking a bowel cancer screening test is easy. It’s a free NHS home test kit called a faecal immunochemical test (FIT). To do the test, you use the kit to collect a small sample of your stool that is sent to a lab via a prepaid postage label. (no stamp is needed). The sample is checked for tiny amounts of blood. Blood can be a sign of polyps or bowel cancer. Polyps are growths in the bowel. They are not cancer but may turn into cancer over time.

About 98 out of 100 people who use their NHS bowel cancer screening kit need no further tests.

Janet Murungi, 56, from Stoke Newington, recently took her bowel cancer screening test and was surprised by how quick and easy it was. “The instructions were very straightforward,” says Janet. “It’s very easy to do – you just follow a few simple steps and you’re done!”

Janet is now encouraging others to do the same. “No matter what, you must not ignore your test. Bowel cancer screening saves lives and early detection means you can get treated sooner if something doesn’t look right. I encourage everyone to be safe and do it as soon as possible.”