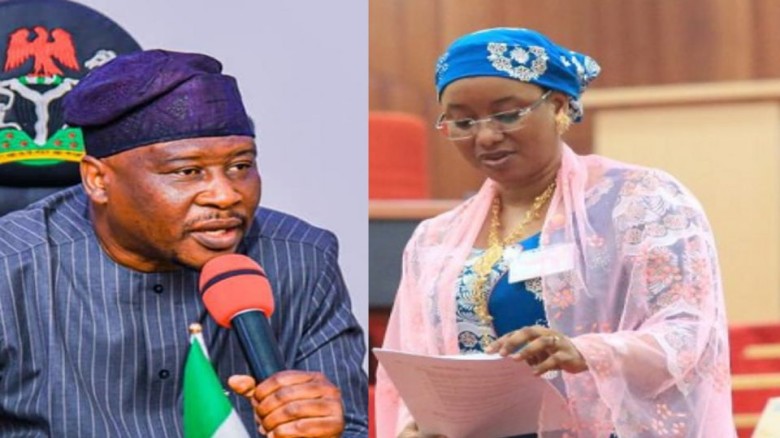 The Adamawa State government and the state All Progressives Congress governorship candidate, Aisha Ahmed, also known as Binani, have disagreed on the use of Mahmud Ribadu Square to welcome President Mohammadu Buhari (retd.) to the state ahead of a campaign rally for the ruling party's presidential candidate, Bola Tinubu.
Binani was previously denied access to the state government-owned facility for the launch of her governorship campaign on January 9, according to a report.
The Adamawa State government, however, stated in a press statement issued by Governor Ahmadu Fintiri's Press Secretary, Humwashi Wonosikou, that the APC candidate was not denied access to the campaign venue.
While the Ribadu Square venue was approved for the APC national campaign team to hold its presidential rally on January 18, 2023, the state government said it asked the APC governorship to choose another date because repair work on the venue will begin on January 7, making the facility unavailable for her use.
While the venue controversy dragged on and Binani secured another location along Airport Road, the APC PCC later revised its campaign schedule, pushing back its national campaign to January 9, with President Buhari agreeing to attend the Adamawa rally to campaign for Tinubu.
Senator Aisha Binani, however, has informed the party of her preference for the rally to be held at the alternate venue she has already secured, which is located along Airport road in Damilu.
According to the NIGERIANWATCH, Binani's opposition to the use of Ribadu Square has caused a schism between her and the state working committee as well as the state chapter of the Presidential Campaign Council led by Martin Babale.
The Adamawa State government, which is also dissatisfied with the politicization of its approval of Ribadu Square for use by the APC, has come out yet again to deny claims that the APC was denied access to the Ribadu Square.
While speaking to journalists on Sunday, Governor Fintiri's Chief of Staff, Professor Maxwell Gidado (SAN), clarified that the state government had never denied the APC the use of Ribadu Square for a campaign rally.
"The state APC PPC wrote to us and said the president is coming on January 9," he said.
They said they can't see the president coming on the 9th and leaving on the 18th, so the campaign will most likely be a joint event, and we gave them the venue. The story now is that Binani, the APC candidate, is still adamant that she will not allow the President to enter Ribadu Square.
"But, would go ahead to hold the APC rally, at an alternate location. But we want to get out and let the rest of the world know that we approved of them. So, if she wants to play politics by refusing to use Ribadu Square, she must do so through the APC."