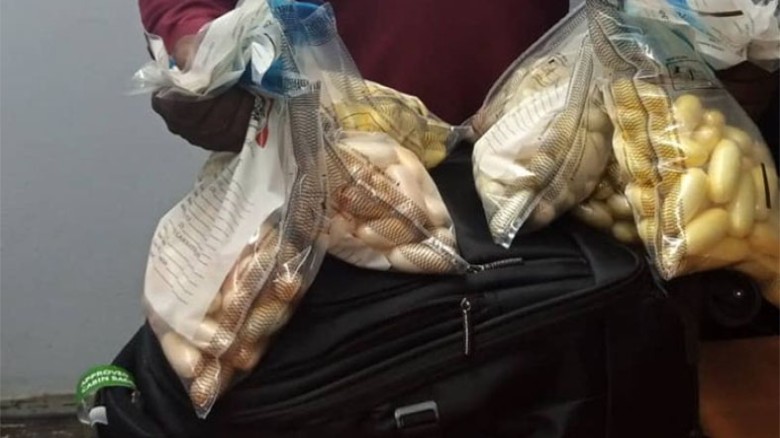 Attempts by drug cartels from Brazil and Canada to bring 126.95 kilograms of cocaine and skunk concealed in herbal tea packs and imported vehicles into Nigeria have been foiled once again by operatives of the National Drug Law Enforcement Agency at Enugu's Akanu Ibiam International Airport and Lagos' Tincan seaport, according to The NIGERIANWATCH.
At about 12:30 p.m. on Friday, January 20, an Ethiopian Airline male passenger, Eze Ikenna, 42, arriving from Brazil via Addis Abeba, Ethiopia, was intercepted at the airport. A search of his two bags revealed 19 large sachets that he claimed contained herbal tea but were later discovered to be 16.20 kilograms of cocaine.
Mr. Femi Babafemi, the NDLEA's Director of Media and Advocacy, revealed this in a statement obtained by our correspondent on Sunday.
In the same vein, on Wednesday, January 18, NDLEA operatives attached to Tincan Command discovered 110.75kgs of cannabis Indica concealed in two of the four vehicles in the container, a 2011 Toyota Sienna and a 2011 Honda Pilot SUV, during a joint examination of a container marked TCLU 7799237 from Montreal, Canada at Sifax Okota Bonded Terminal.
Babafemi also stated that the agency's deliberate efforts to reduce access to illicit opioids paid off again on Tuesday, when a consignment of Tramadol that had been tracked by NDLEA operatives for several months was eventually traced to a warehouse at Greenfield estate in Lagos' Amuwo Odofin area.
"A total of 1,645,560 Tramadol 100mg, 200mg, and 225mg pills were recovered when the store was opened.
On the same day, 60,000 Tramadol 250mg pills were recovered from a wanted drug dealer, Diugwu Alphonsus, in the Bariga area of the state, while raids in the Akala area of Mushin on Wednesday and Friday resulted in the recovery of 781.7kgs of cannabis.
"In Osun state, NDLEA officers on Friday arrested a blind 67-year-old grandfather, Aliyu Adebiyi, in whose home they discovered 234 kilograms of cannabis at Sokoto village, Owena Ijesa, Atakumosa East LGA. In his statement, he stated that a drug dealer kept the consignment with him for a monthly fee of N6,000 and paid for three months in advance," Babafemi said.
Haruna Abdullahi, 45, a leper known for drug dealing, was arrested in Garko town, Kano, on Thursday, with 2.2kgs of cannabis and various quantities of Diazepam and Exol recovered from him.
According to Babafemi, 370kgs of cannabis were recovered from a sawmill in Ilale, Owo, Ondo State, when operatives stormed the industrial plant after receiving credible information.
In Edo State, 261 kilograms of the illicit substance were seized from a suspect, Uche Monday, at Uneme-Osu, Ososo Road in the state's Akoko Edo area, with another 74 kilograms evacuated from a bush at Okpela fertiliser community in Etsako East LGA.
On Monday, January 16, NDLEA operatives raided the Lugbe area of the FCT based on credible intelligence that a dealer was operating in a batcher on the outskirts of town.
A search of the batcher yielded 42.9kgs of cannabis, 15 grams of cocaine, 137 grams of methamphetamine, and N2,148,500 in cash, all of which were believed to be proceeds of the criminal trade.