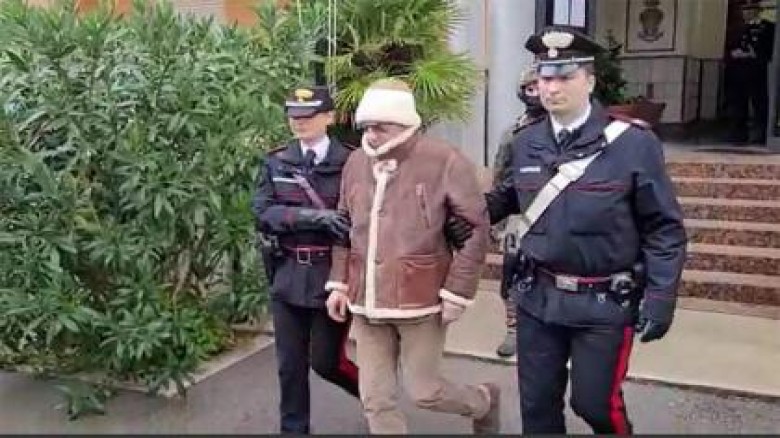 Matteo Messina Denaro, a ruthless operator who had been on the run for 30 years, was apprehended by Italian police on Monday, one of the most notorious Sicilian Mafia bosses.
Officials said the 60-year-old was arrested after visiting a health clinic in the Sicilian capital of Palermo, where he was being treated, and surrendered without a fight.
Messina Denaro was a key figure in Cosa Nostra, the real-life Sicilian crime syndicate depicted in the Godfather films. He once boasted that he could "fill a cemetery" with his victims.
Italian Prime Minister Giorgia Meloni flew to Palermo to congratulate officials in person for what she said was a "major blow for organised crime".
The mobster, who had been on the run since 1993, was thought to be receiving colon cancer treatment on a regular basis and was using a false ID.
Prosecutors said he was not armed when he was arrested and appeared to be in good health, dressed well and wearing luxury accessories worth up to 35,000 euros.
Messina Denaro was one of the mob's most brutal bosses, serving a life sentence in absentia in 2020 for the murder of anti-mafia judge Giovanni Falcone in 1992.
Chief prosecutor Maurizio De Lucia confirmed that despite his fugitive status, he had been a "operative boss", with "contacts and economic resources".
But he warned that the Cosa Nostra, which in recent years has been eclipsed by the rival 'Ndrangheta mafia, "has never been the exclusive property of Messina Denaro".
"Obviously, the mafia has not been defeated, and the biggest mistake would be to believe that the game has ended," he said.
"Because the game hasn't ended yet."
- Myth of the Mafia
A father interrupted Monday's press conference to ask prosecutors if he could now see justice for his son, a mafia victim.
"We will not give up; we will go to any length to find the truth," De Lucia replied.
Messina Denaro was the most wanted man in Italy, accused of mafia involvement, multiple murders, and the use of explosives.
He was convicted in absentia of being responsible for the 1993 bombings in Rome, Milan, and Florence, which killed ten people.
He was also found guilty of the murder of a teenager who was strangled and dissolved in acid after his father testified against him.
Messina Denaro is significant because he is "the last, the most resilient, the 'purest' Sicilian mafioso remaining," according to Anna Sergi, a criminologist at the University of Essex.
NCPC
"He embodies the Cosa Nostra's great historical power. The myths surrounding his time on the run contribute to the persistence of the Mafia myth."
"A man among the most wanted in the world must have had protection," she said, noting that little was known about where he had been or how he had remained hidden.
- A pivotal battle -
Messina Denaro was escorted by officers to a waiting vehicle after being arrested, wearing a hat and a brown leather jacket with a cream sheepskin lining, according to police images.
"I'm Matteo Messina Denaro," he said to officers, according to ANSA.
According to police videos, locals cheered and applauded as he was driven away from the Palermo clinic by police.
"Today represents the end of Cosa Nostra for me," Palermo resident Giovanni Guarino said.
"The old mass murder mafia that brought this country down (has ended)."
Prosecutors refused to comment on how he had been living for the past three decades, saying only that their investigation into his whereabouts had accelerated in recent days.
They had information about someone matching his description who had scheduled an appointment at the Palermo clinic, but his identity was not confirmed until Monday morning.
Prosecutors stated that wiretaps were critical in their investigations.
- On the ground -
Investigators had spent decades combing through the homes and businesses of his known allies in Sicily, looking for grottos, caverns, or even bunkers hidden inside buildings where he could be hidden.
Police discovered in 2015 that he was communicating with his closest collaborators via the pizzini system, which involved leaving tiny, folded paper notes under a rock at a farm.
Federico Varese, a criminology professor at Oxford University, said the fact that Sicilian mob families are weaker these days than their counterparts in Calabria or Campania may have helped in his capture.
He said it was “amazing that he was still in Palermo”.
“But it makes sense. "You must be in the territory if you want to continue to wield power," he said. Thanks