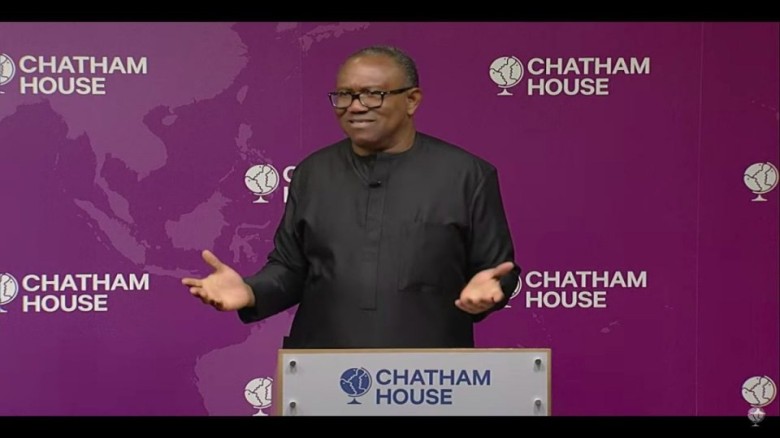 Peter Obi, the Labour Party's presidential candidate, has claimed that all funds borrowed since 2015 to improve the national economy have been squandered.
On Monday, the LP presidential candidate stated this at the Chatham House in London.
While analyzing the country's rising debt, Obi stated that Nigeria successfully increased its debt from N15 trillion in 2015 to N75 trillion today, adding that the sharp increase in debt was due to borrowing for consumption, claiming that the entire money was "thrown away."
While stating that borrowing is necessary for any economy to thrive, Obi reiterated that borrowed funds must be invested in economic development and production.
"There's nothing wrong with borrowing money. Borrowing is legal, and every government I've studied in the world borrows; Britain, for example, owes 70% of its GDP right now. Every government I know is dependent on borrowing.
"Norway owes $1.4 trillion in sovereign wealth. The world's economies, including the world's largest economy, America, owe nearly 100% of their GDP. China, the world's second largest economy, owes nearly 70% of its GDP, while Japan owes more than 230 percent. But let me explain the distinction.
"Japan is owing 230 per cent of their GDP but they invested the money to save their economy and even with that, Japan is still the largest holder of the US treasuries, so there's something they can fall back on. Borrowing is therefore not wrong.
"However, when you borrow for consumption, you have a crisis. Nigeria had a per capita income of $2,500 in 2015, and we owed approximately N15 trillion. Today, using the central bank's methods and means, we owe about N75tn, increasing our debt profile by more than 400%. That means the money we borrowed was wasted."
Obi went on to say that if elected, he would fight corruption to make Nigeria a country where citizens are proud to hold their passports and foreign investment thrives.
"We will fight and stop corruption. The first step in combating corruption is to eliminate it entirely. If you are not involved, your wife, family, or those around you are not involved, you will lose it by more than half. We are committed; we cannot let these young people down; we must build a new Nigeria.
"Investors will come back, those who left and those who are leaving will come back, we want to bring them back. Nigerians are willing to return if they can find a country to which they can return. Nigerians must be proud to use this green passport again," he said.
According to Nigerianwatch, the LP presidential candidate first stated in November 2022 that borrowing must be strictly channeled into production while explaining his consumption to production theory.
He also stated at the time that federal borrowing for consumption should be discontinued and channeled into regenerative projects.
According to Nigerianwatch, if the National Assembly approves the President's request to restructure the Ways and Means Advances, Nigeria's public debt burden could reach N77 trillion.
The Ways and Means Advances is a loan facility provided by the Central Bank of Nigeria to finance budget shortfalls in the government.
Patience Oniha, Director-General of the Debt Management Office, revealed this during the public presentation of the 2023 budget by Dr Zainab Ahmed, Minister of Finance, Budget, and National Planning.